Danny Hicks a.k.a. Jake from Evil Dead II and “Tim-O” O’Saben emailed us to let us know that the have a new music CD out called: “The Tim-O and Danny Hicks Brain Invasion, Slightly Concussed”. Here’s some background:

The last two tracks are bonus Tim-O tracks. “Who Goes There?” is based on John W. Campbell’s novella which is the source material for both of “The Thing” films. “The Hiding Game” is based on “The Dark Night Of The Scarecrow” and is dedicated to writer/producer (&friend) J.D. Feigelson.

If interested, you can check out “The Tim-O and Harley Show” horror themed podcast at infernaldreams.net. 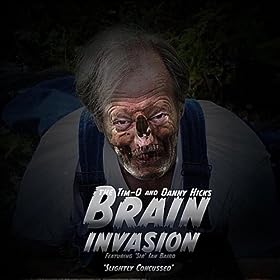 Buy the CD now on Amazon or iTunes